Cloudflare helps applications to scale globally with a basket of plug-and-play features that provide users around the world with fast, secure and reliable access to content:

Part of Cloudflare’s huge popularity is because of its quick implementation with no code changes required. Instead it uses an easy-to-use management dashboard for configurations.

Cloudflare is by far the most popular Content Delivery Network according to Stackshare. More importantly, it has grown rapidly to be used by almost a third of the world’s top 100,000 sites: 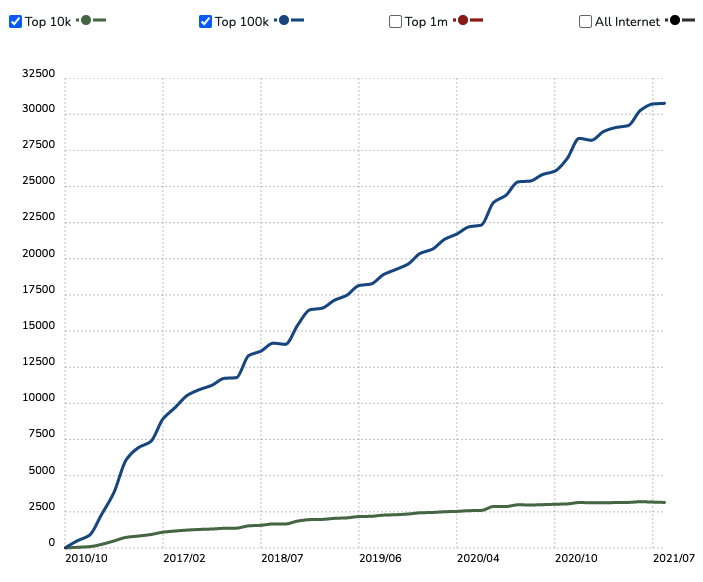 Auto Trader, the largest car marketplace in the UK, were using a number of applications to manage their platform’s performance and security. This complex setup was expensive and required a lot of maintenance.

Switching to Cloudflare increased their team’s productivity by allowing them to manage everything from one dashboard. Cloudflare’s built-in security features improved the detection and blocking of malicious activity, while performance features decreased latency by 50%.

Shopify powers more than one million businesses in over 175 countries worldwide. They wanted to help merchants increase their sales by providing customers with a faster shopping experience. The decision was made to migrate all their merchants to Cloudflare, which they managed to do without disruption.

Shopify then used Cloudflare’s load balancing feature to better distribute traffic between its servers. The acid test was Black Friday 2019. The results were spectacular; Shopify merchants achieved record sales with a 60% increase over the previous year. Peak sales volumes averaged more than $1.5 million per minute.

CobbleWeb uses CloudFlare mostly to decrease application load speed  for international users. For instance, we implemented it for FanPass’s event ticketing marketplace because their buyers are situated all over the world.