React Native offers plenty of flexibility. As a component-based framework it can be used to create standalone iOS or Android apps from scratch or be added to existing mobile projects.

Its portability supports faster, cheaper mobile app development. Why? Because a single codebase can be shared between platforms, making it easier to simultaneously develop and maintain iOS and Android apps.

Access to device platform APIs means that features like phone cameras or user location can be used. This can be used to enhance the user experience via features such as product image search or nearest store location

React Native was first released by Facebook in 2015 and has since been maintained by them as an open source project. As of 2018 it had the second highest number of contributors on Github. It is further supported by partners such as Microsoft that have invested in its maintenance and further development.

Since 2019, React Native has gone head-to-head with Google’s Flutter as the most popular cross-platform mobile framework. 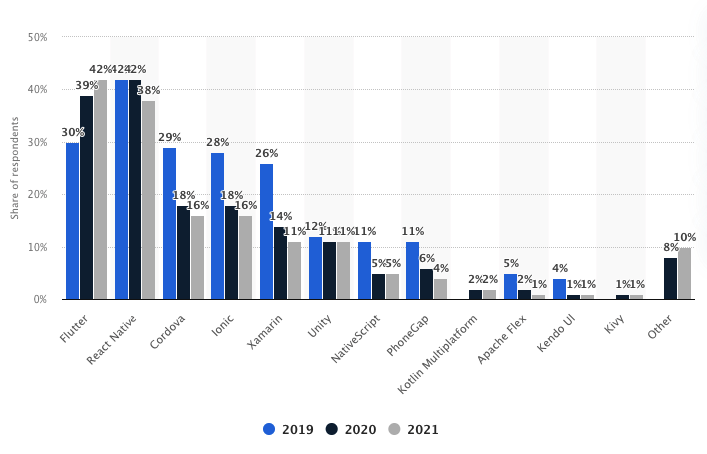 React Native is ideal for cost-and time-conscious marketplace startups. In addition to its cross-platform portability, JavaScript-based components allow code updates to be viewed without having to rebuild the native app each time. This promotes rapid iteration and makes testing of new product features much easier.

The world’s largest meta-marketplace for e-commerce businesses, Shopify, has given React Native a resounding long-term endorsement. This included rewriting their flagship point-of-sale app in React Native.