AWS is the world’s largest and most comprehensive provider of cloud infrastructure and associated services. Its growth has largely been driven by the move from self-hosted IT infrastructure to cloud-based services. This has freed companies up to focus on their core activities and accelerated the development of web applications.

The AWS platform offers more than 200 products, services and tools that can be used together or separately to build web applications. AWS’s DevOps tools can for example be used in conjunction with non-AWS clouds or even dedicated servers.

Some of AWS’s benefits are:

Common AWS products used for the development of web applications include:

Amazon EC2 is a cloud computing platform made up of processors, storage, networking, and operating systems. AWS guarantees 99.99% uptime.

The AWS Partner Network includes thousands of developers who specialise in using AWS services to build applications for customers. AWS hosts more than half of the top 10,000 and more than a third of the top 100,000 sites in the world. According to Statista it is the leading provider of cloud infrastructure in 2021: 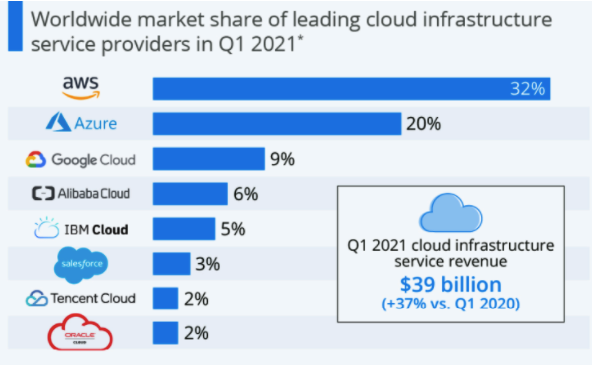 Airbnb migrated most of its cloud computing functions to AWS a year after it was founded to simplify the management and customisation of its infrastructure stack. This freed their team up to focus on growing the platform. The rest is history.

Next (Fraud and Security > PerimeterX)